The End Of Silent Complicity.

If you believe in doing the right thing simply because it's right,

whether or not it's popular,

If you believe that you can be in the majority and still support the minority, in basic human rights,

If you believe that moving mountains of obstruction can reveal the foundations of justice, but only if we all decide it is so,

A Message From Josh

Our mission is to organize and focus the energy of the privileged majority to uphold and defend the universal moral and ethical rights of the affected minority, in the furtherance of equality of opportunity and the basic human right to be free.

As we accomplish this, we fulfill our vision of eradicating pure hatred for another person

eliminating the us vs. them mentality with the realization that we are going to win or lose together.

Our Values and Standards

And why it's the answer

Privilege is an innate, unearned advantage that many of us were born with in some facet of life. It's something we didn't ask for, but still received. It often comes with an inherent bias towards those without that advantage and blind ignorance that there even exists an advantage. It is not anyone's fault and there's no reason for shame or guilt.

Privilege exists in many areas. It can be found in race, gender, sexual orientation, national origin, economic status, education level, and other areas critical to ensuring equal opportunity for Freedom.

Those who are fortunate enough to have it, have its power. And with power, comes responsibility. A responsibility to help others who suffer the broad, systemic, deleterious effects of a set of societal systems built by those privileged.

How much more likely blacks are to be pulled over than whites during a traffic stop.

How much women are paid for each dollar a man makes in similar positions.

Percent of black adults say being black is very or extremely important to how they think about themselves; 15% of whites say the same about being white.

How We Do It

Find or Request A Cause

But what if right had a majority?

Injustice is painted as a black and white issue. The majority is busy with their own lives, silent and complicit.

The majority decides to stand behind those at harm of the injustice, raising the stakes, changing the game.

Artificial lines disappear, justice is blind, and hate is no longer tolerated. Extremists are shamed back into the shadows 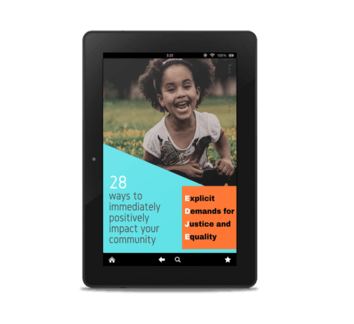